The monastery of Nea Moni is perhaps the most important monument in Chios, built among pine trees in the valley of Mount Provatas. At the same spot in the past, three local monks, Nikitas, John and Joseph found the icon of the Virgin Mary. A small church was initially built called Palaia Moni (the old monastery).

The Promise
It is said that when Constantine Monomachos was exiled in Mytilene, he heard the prophecy of the Palaia Moni monks who spoke about his rise to the throne of Constantinople. He promised them the construction of a grand temple if their vision came true. To make sure that Constantine would remember his promise, the monks asked for his imperial ring. In 1042, Constantine was recalled from exile thanks to the Empress Zoe and with their marriage he was appointed emperor. The monks travelled to Constantinople to remind the emperor Constantine his promise, who in gratitude kept it and started constructing a magnificent Monastery in honor of the mother of God.

The Construction of Nea Moni
In 1042 a magnificent temple is being built with expenses, materials and architects from Constantinople. Nea Moni consists of the Catholicon, the Refectory, the Tower, the Cistern (underground cistern to collect rainwater), the reception hall, the cells, the Belfry, the Library and the two chapels of Holy Cross and Saint Panteleimon. The Catholicon is of typical octagonal architecture and dominated by its dome. The temple consists of the Outer Narthex, the Inner Narthex and the Nave. The church's interior is decorated with colored marbles and golden mosaic compositions depicting the Annunciation, the Nativity, the Presentation, the Baptism, the Transfiguration, the Crucifixion and the Descent into Hades. Also, mosaic icons of saints and other biblical scenes adorn the walls. The miraculous icon of the Virgin Mary stands in the church with the emperial ring on it. The monastery flourishes during the Byzantine period. It has a lot of monks and during its prosperous time it owns one third of the island. It enjoys great respect and honor and gains the favor of the Byzantine emperors.

The mosaics
The mosaics of Nea Moni date back to the 11th century and constitute one of the three collections of the Byzantine period in Greece. The mosaics are located in the inner narthex and the nave. The artists from Constantinople used their bright ideas and skills to decorate the church the way imperial palaces were adorned. The mosaic painting is strenuous and hard work. However, the outcome is amazing and rewarding. It's natural stones and glass baked with metal oxides that give the desired colorings. A thin sheet of pure gold was used for the gold color creation. Each composition was designed on a special layer and then the mosaics were placed on it. In Byzantine art, mosaics were used to adorn important monuments as they gave stunning and long-lasting results.

Disasters
The monastery was tested many times in the past. The main damage was caused during the Massacre of Chios in 1822, when the Ottomans slaughtered the monks, plundered the monastery, took the women and children for slaves and then put the monastery in flames. The great earthquake of 1881 completed the destruction by demolishing the dome and a large part of the church thus lots of mosaics were ruined. Due to the devastation of the monastery several treasure hunters were encouraged to dig around in walls and buildings and therefore destroy the initial features of the place.

Nea Moni in recent years
Several restorations have improved the monastery's looks substantially. In the yard there are buildings from all historical periods of the monastery. What is still preserved from the original parts is the Catholicon, the cistern, the tower, a part of the Refectory and the church of St. Luke located outside the wall next to the cemetery of the monastery. An important part of the mosaic decoration has been lost but what's still left is a clear reminder of the splendor Nea Moni once obtained. In the temple of the Holy Cross, skulls and bones of slaughtered victims are kept and relics and valuables objects are preserved in the Museum of the monastery. Nea Moni has been declared world heritage monument protected by UNESCO due to its significant historical and architectural value. The monastery celebrates on August 23rd. 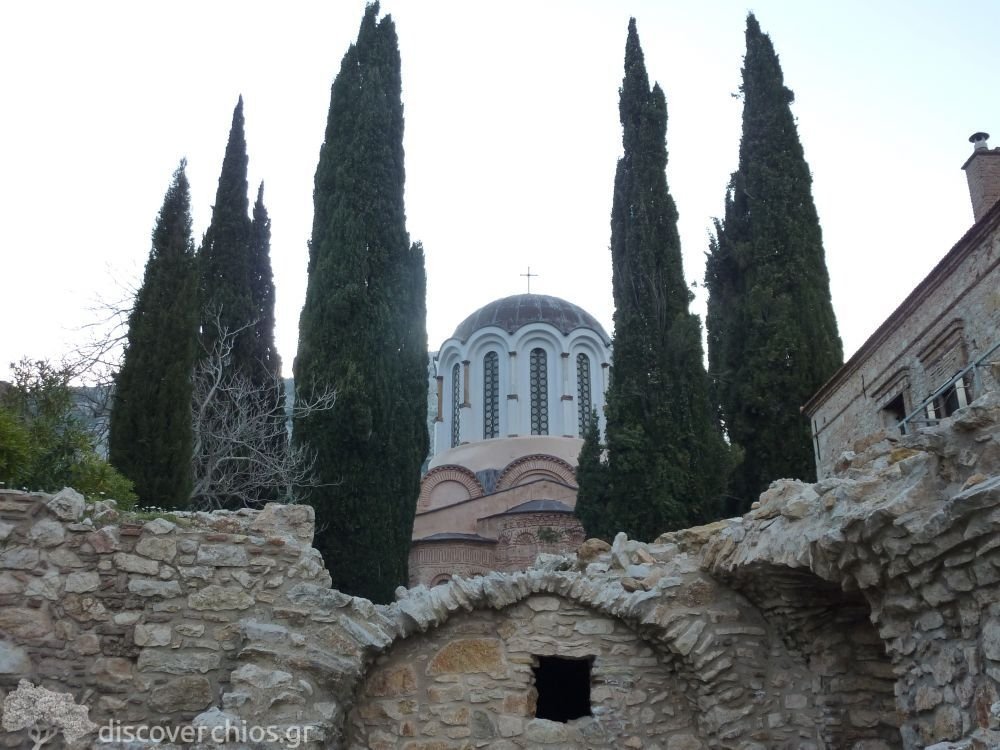 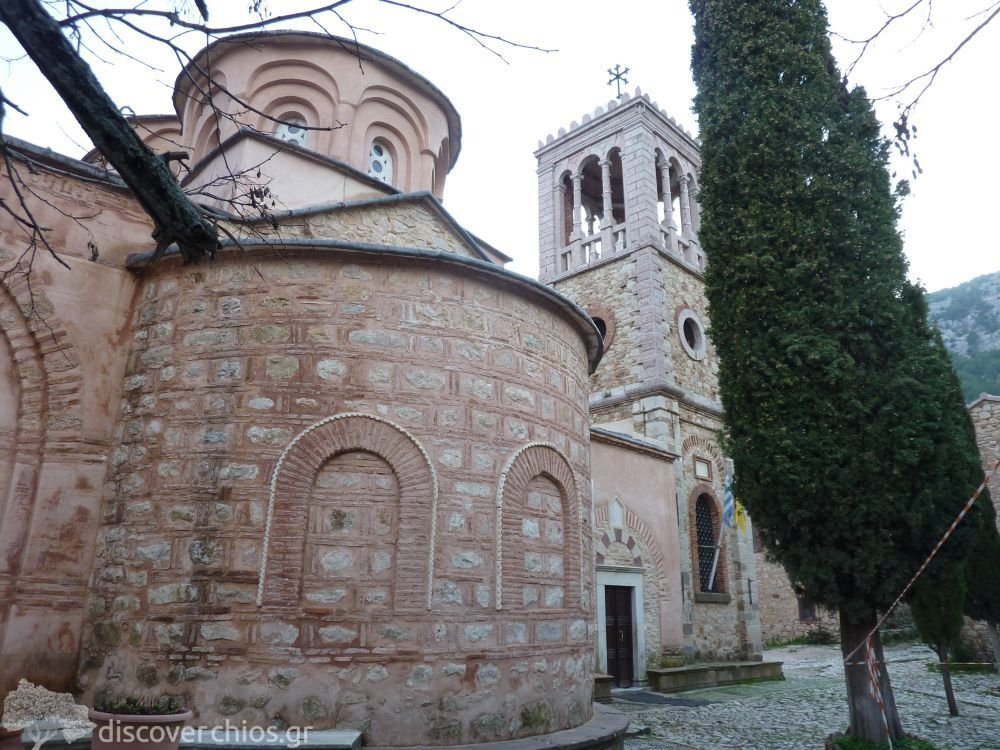 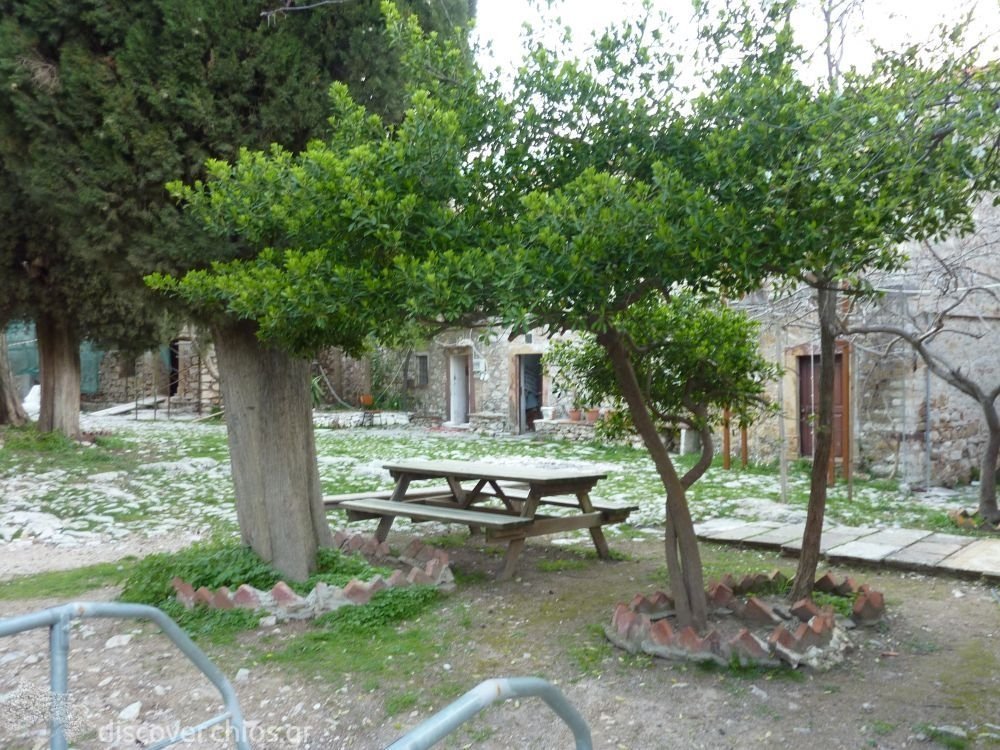 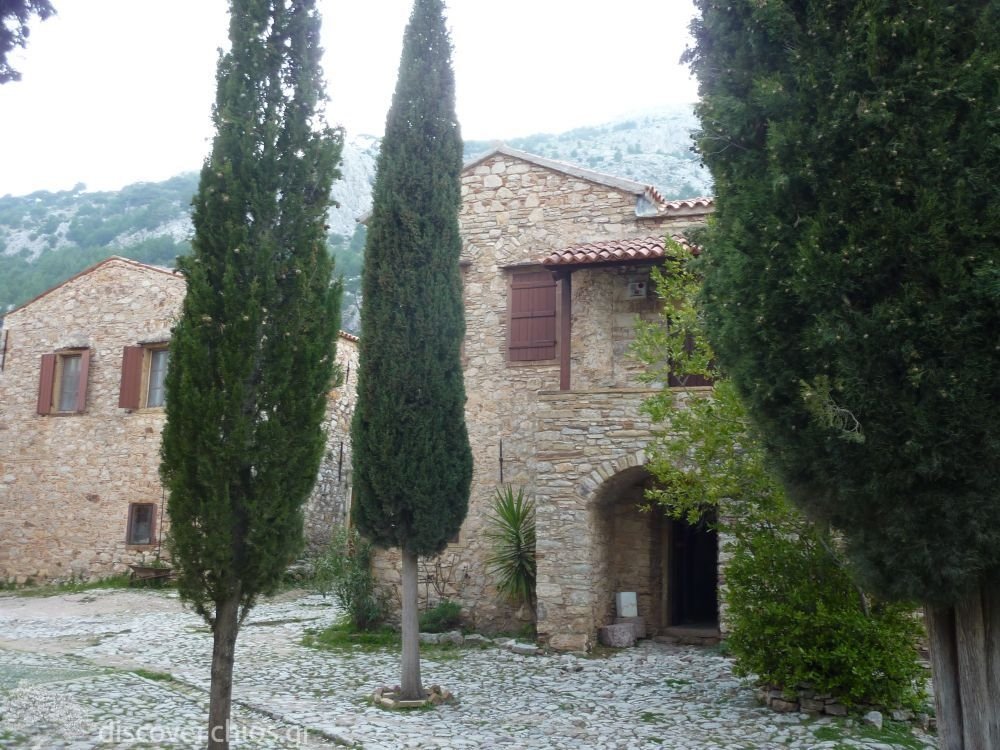 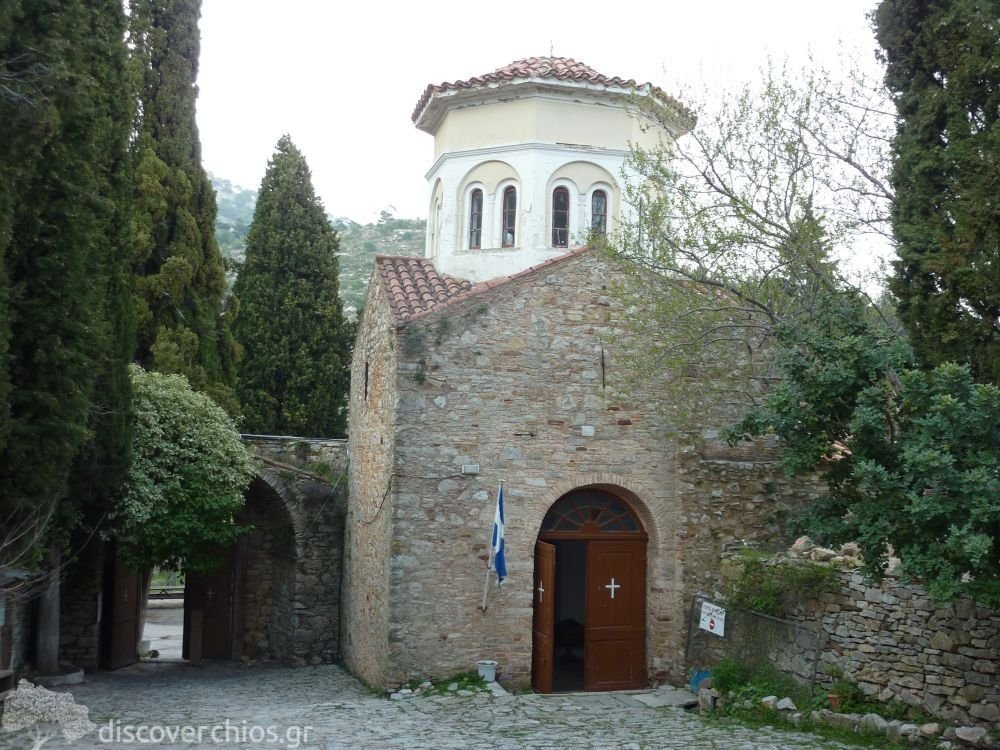 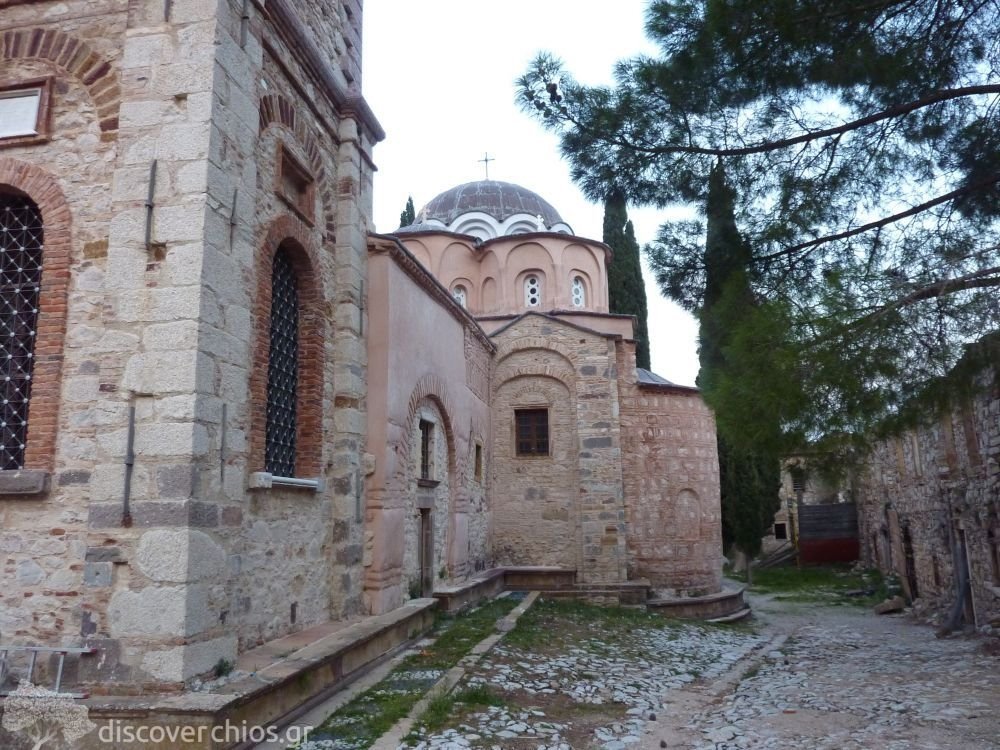 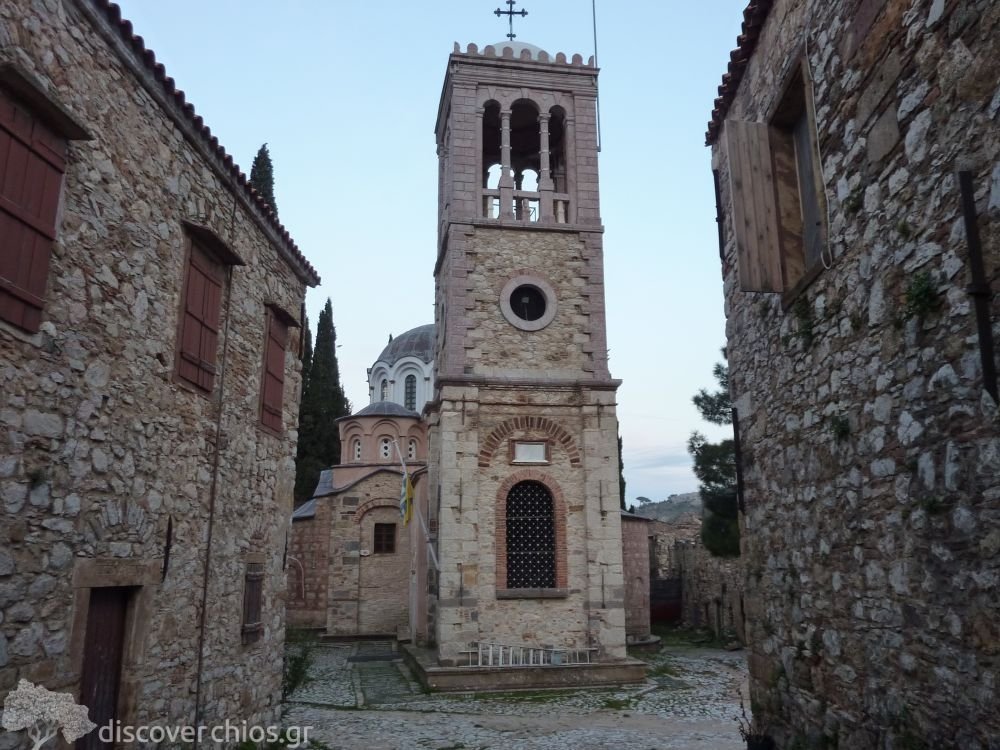 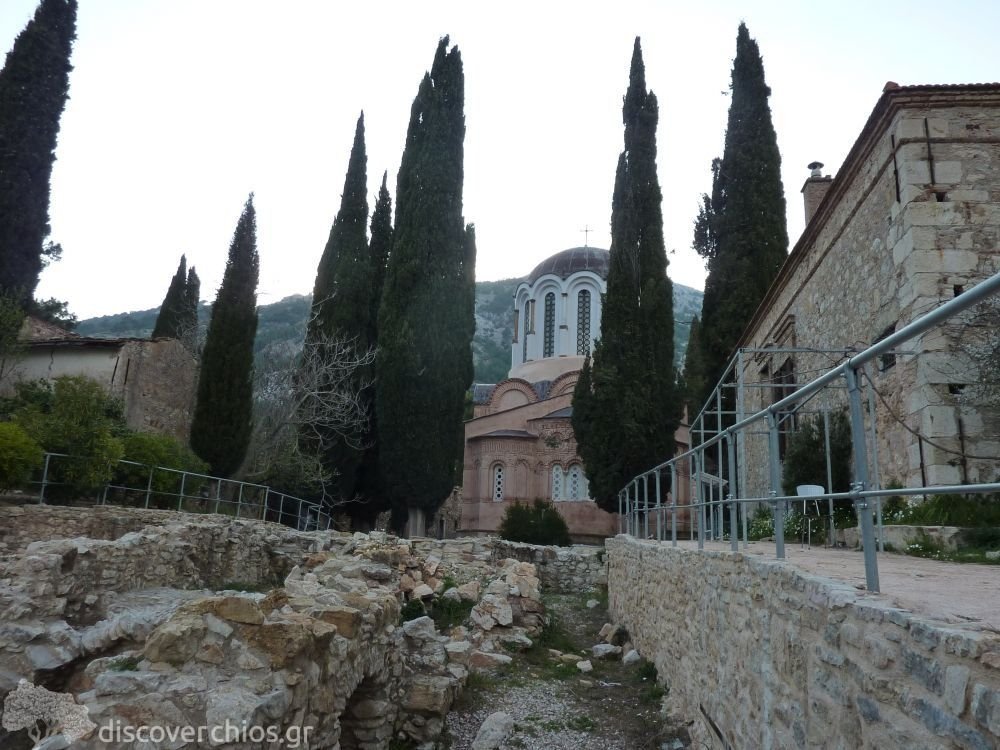 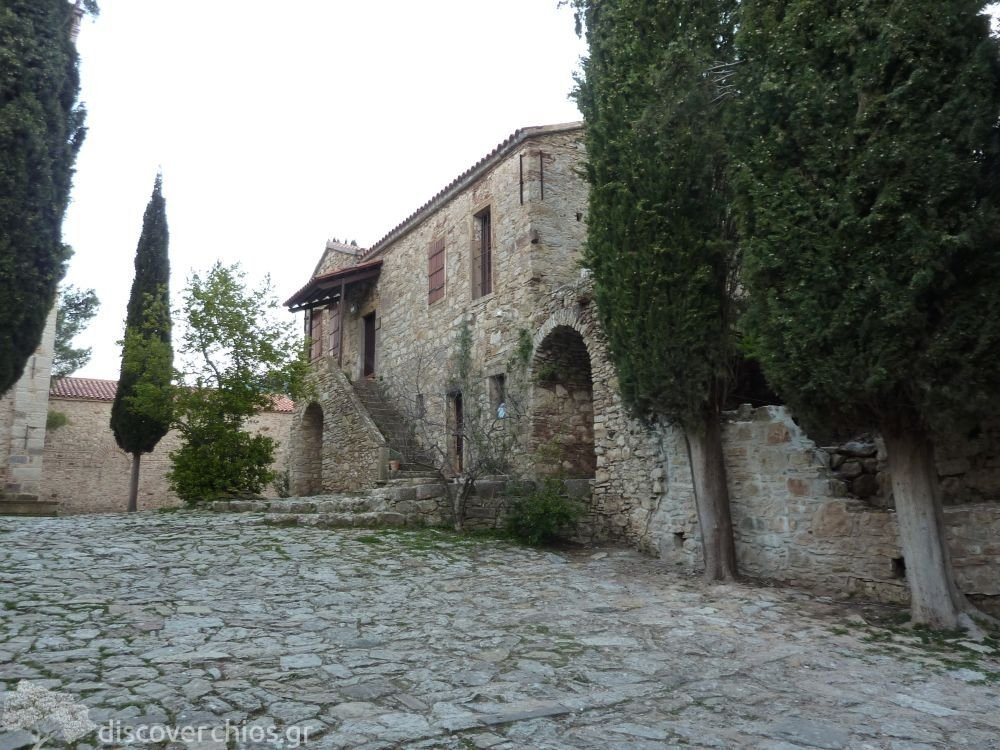 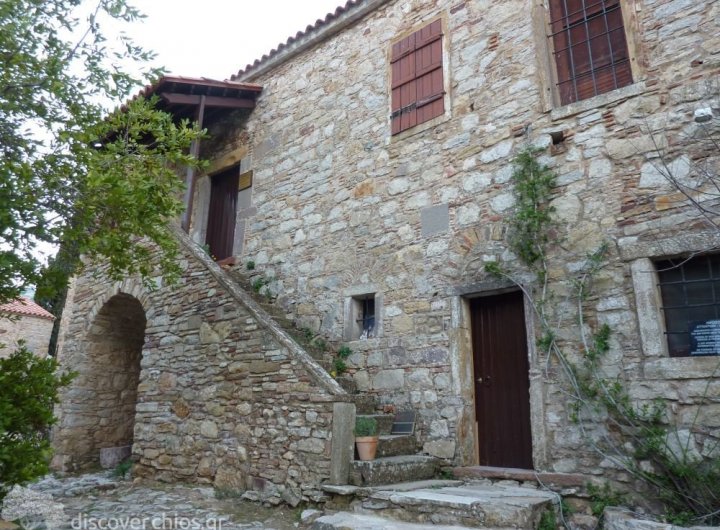